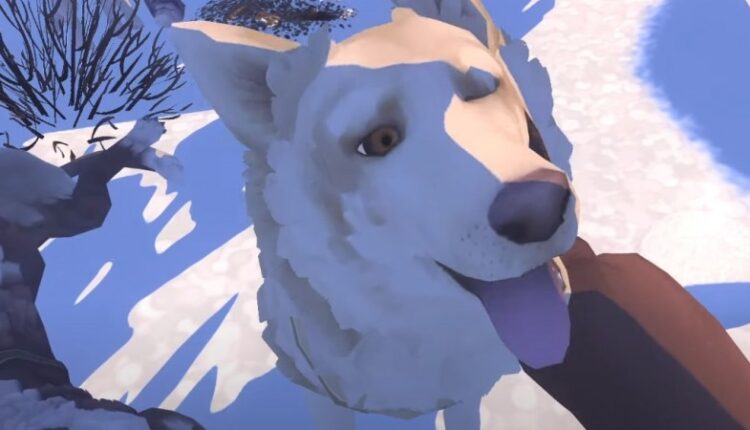 
Picture inviting snow-packed mountains, a continuously evolving Alaskan skyline, and the best canine companions a person could ever hope for. That’s exactly what Timberline Studio’s The Red Lantern has to offer with its immersive, story-driven, roguelite survival game. Even if survival games don’t typically draw you in, The Red Lantern offers a magic that supersedes the genre. The art style and narrative flow in a way that isn’t constrained necessarily by its mechanics or the usual bindings that survival games typically come with.

In this dogsledding adventure, you play as a woman who has abandoned city life to chase her dogsledding dreams into the Alaskan mountaintops. Through the beginning parts of the story, she visits several dogs, each with different personalities and unique skills that help later on. As a dog lover, going through each area to meet the different canine companions is too pure for this world, especially when learning the personality of each pup. Whether you’re looking for a hunter to track down squirrels or just want a cuddle-bug that knows how to navigate the wilderness, each animal is created to feel real, which helps to form a bond between you and each dog for the adventure ahead.

The Red Lantern is a survival game, but you have less autonomy than you may expect. You have some agency in your dialogue choices and actions – choosing when to rest, when to feed your animals – but the game plays itself in a lot of ways. While you take to the slopes for sledding runs, you don’t have direct control over your movement outside of base directional queues. Instead of feeling frustrating, this surrender of control makes the game feel therapeutic in a way that I find incredibly enjoyable. It allows you the freedom to enjoy the experience while taking in the beauty of the world at large without panicking or worrying about running your sled (and dogs) into a massive ditch somewhere. From the color palette changes to the subtle shifts in the passing scenery, this journey is aesthetically appealing right from the start, and the ability to sit back and enjoy it makes the limited movement worth it.

The survival aspect comes from natural progression and resource management. Dogsledding is hard work, and each trail marker passed means less energy for your canine pals leading the charge. You can rest in established campsites to recoup energy and playfully interact with each dog, leaning into their personalities. Barkley, for instance, is an extremely loyal and protective animal, which means extra pets should always go to that little cutie when given a chance.

Keeping an eye out on how many bullets are left is key for hunting and protection against wildlife, while med kits are crucial for any unforeseen injuries that may occur. A run may present you with opportunities to claim a supply drop or hunt an animal, but engaging in those off-trail actions expends more energy. The more energy depleted, the higher the danger is for both you and your animal companions, so keep an eye on those gauges in the corner of your screen. 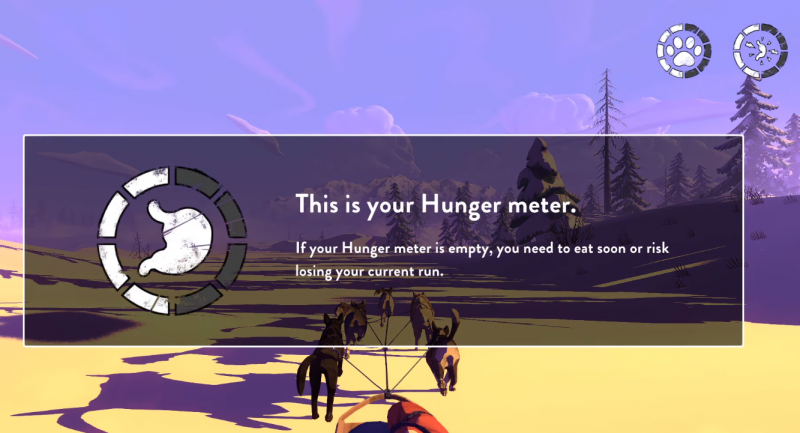 The gauges for survival are easily accessible, and a constant reminder of your in-game mortality. While this new adventure into the Alaskan wilderness is beautiful, it’s far from safe, and not all of those dangers are external. The problem with this, however, is that sometimes it is easy to assume you have more time than you actually do, and that’s where the randomly generated content can either help or hurt the gameplay experience.

A lot of the interactions you see on the trail come down to luck, which adds another layer of thrill to survival. Food is a valuable resource and supplies are scarce, so your success can hinge on when you are given the opportunity to stock up again.  My first failed run following that initial kick in the teeth was due to the fact that I tend to procrastinate. Much like I do in the real world with “I’ll go to the next gas station to fill up my car,” I often made this same choice in-game. That choice will sometimes pay off, but not always. And when it doesn’t, that’s another mission to flush down the drain. This aspect of The Red Lantern doesn’t dominate the experience, but it does cause a lot of frustration, and the reliance on luck staunches the replayability potential.

Item management becomes easier as time goes on, but one piece of advice: Don’t be afraid to fail. The first time taking to a trail with your gathered pups will, more than likely, end in failure due to the low number of supplies allocated at the start. Don’t worry, this is a deliberate attempt to show off just how important management is in the game, so think of that first run as a tutorial and less as a reflection of your skill.

Another aspect of survival that is important to keep an eye on is the temperature. It’s possible for you and the dogs to starve or even freeze to death. This makes awareness of any depletion absolutely vital for successful runs. At first, that thought overwhelmed me, and I found myself tracking each gauge obsessively in an effort to avoid any accidental deaths. Luckily, The Red Lantern does offer a feature in the main menu option that allows for the choice to make sure the dogs stay alive no matter what. This is a great addition from the studio for those like me that get a little squeamish with animal violence in games.

Overall, The Red Lantern is a stunning game that offers a juxtaposition of being both a calming experience and one that can inspire a level of anxiety due to the more randomized nature of the mechanics. Watching that meter drop and feeling hope drop down with it can sometimes feel like a punch to the gut, but eventually a rhythm is found and relaxing around a campfire with a full belly, a warm fire, and adorable furry friends more than makes up for those dips in euphoria.