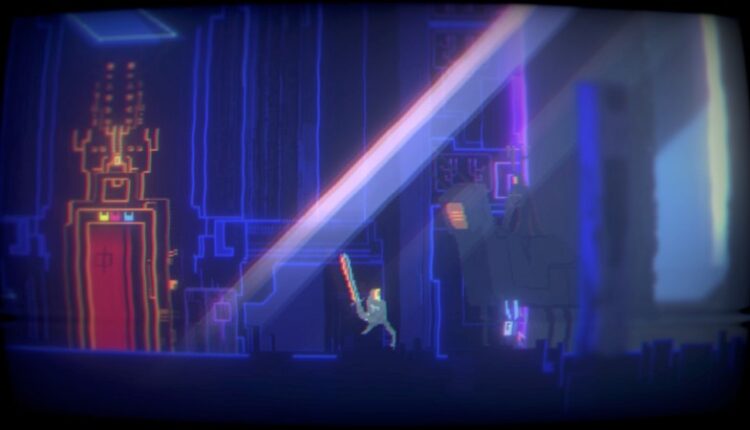 
Adventures set inside of a computer is nothing new, but Narita Boy does it with a powerful sense of style that makes it impossible to ignore. The 2D narrative action game is the debut title by Studio Koba, and was successfully Kickstarted with the help of over 5,000 backers. After watching the game’s slick debut trailer, it’s easy to see why people would get behind the project: it looks very cool, and the presentation nails the technology and era that inspires it.

Narita Boy transports players inside of a old computer and drops them into the Digital Kingdom. At the behest of the kingdom’s ruler, the Motherboard, players will take on the Stallions, rogue code seeking to enslave the Digital Kingdom. Players will defend a colorful cast of characters using the legendary Techno-Sword, a transforming weapon that can also take the form of a shotgun and fire laser beams.

On top of slicing or blasting apart digitized enemies, expect puzzle-solving and plenty of platforming across the pixelated landscapes. Along the way, players will also experience the memories of the Digital Kingdom’s human creator. The 80s style presentation looks great, and the soundtrack composed of analogue synthesizers only enhances Narita Boy’s nostalgic appeal.

If Narita Boy catches your eye, you’ll be happy to know the game is coming sooner than later. It’s scheduled to release this spring for PlayStation 4, Xbox One, Switch, and PC. Narita Boy will also come to Xbox Game Pass on console and PC at launch.

On the back of Narita Boy’s announcement, Publisher Team17 is launching the Saving The Arcade World campaign, a great cause aimed at raising awareness for the struggling arcade industry and helping preserve and protect that scene with help from The Strong: National Museum of Play, The National Videogame Museum in the UK, and Spain’s Arcade Vintage: Museo del Videojuego. You can learn more about the cool campaign at Team17’s website.