Knockout City is a team-based, competitive dodgeball game launching May 21 to PlayStation 4, Xbox One, Switch, PC (Steam/Origin). The game will also be playable with enhancements on PlayStation 5 and Xbox Series X. It’s being developed by Velan Studios, the team that developed Mario Kart Live: Home Circuit. Tonally, it taps into the same well of wackiness of games like Fortnite or the recent Destruction AllStars with an over-the-top, lighthearted tone

Described by Velan as “Dodgebrawl”, the goal of eliminating players by pelting them with balls remains, but there’s a lot more sizzle to the steak. For one, players can charge up their throws, which creates faster, more powerful shots. In addition to normal tosses, you can also use fancy trick throws to confuse opponents. Naturally, players can catch incoming balls to flip the tables on attackers, which often leads to intense back and forth volleys. Players can take two hits before going down, though you’ll respawn seconds later; this isn’t “one hit, you’re out” like regular old dodgeball.

Balls come in six different types on top of the standard version, though only three were available during my session. My favorite is the Cage Ball, which temporarily traps players in a spherical cage, allowing you to use them as a weapon or to simply lob them into the nearest pit. The gravity-defying Moon Ball lets holders jump higher and sends anyone on the receiving end hurtling through the air. Bomb Balls trigger a hot potato style countdown upon picking up, and it’s explosive range can damage enemies and allies alike. 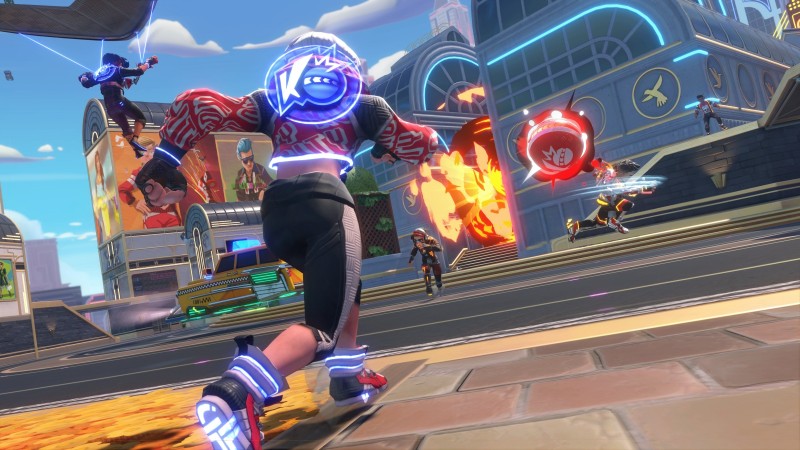 When unarmed, players can tackle opponents which causes them to drop balls. You can also do it to simply deter/grief them. Players can even roll themselves up into balls. This has a risk/reward element: opponents get knocked out instantly when hit by human balls, but you also risk enemies catching your teammates. Getting around involves basic platforming, and players have a glider for crossing larger gaps or to attack from above.

Knockout City is not a hero game. There are no specialized classes or individual loadouts. Every player controls exactly the same. Knockout City promotes skill-based play and, most of all, teamwork. For example, you’ll want to pass balls to teammates who may have a more advantageous position. Players can communicate using voice chat, and there are also in-game commands like “Pass it to me!” That said, there’s no actual pinging system ala Apex Legends. If you prefer playing with peeps you know, friends can form persistent, clan-like crews of up to 32 members to play together in Private Matches and take on rival squads.

Knockout City features full cross-play as well as cross-progression. You’ll still need to purchase the game again if you want it on another platform, though. This is an online only multiplayer title, meaning there’s no offline or single-player component. The closest thing to it is your hideout, the hub area where you can practice using moves and balls against a target dummy.