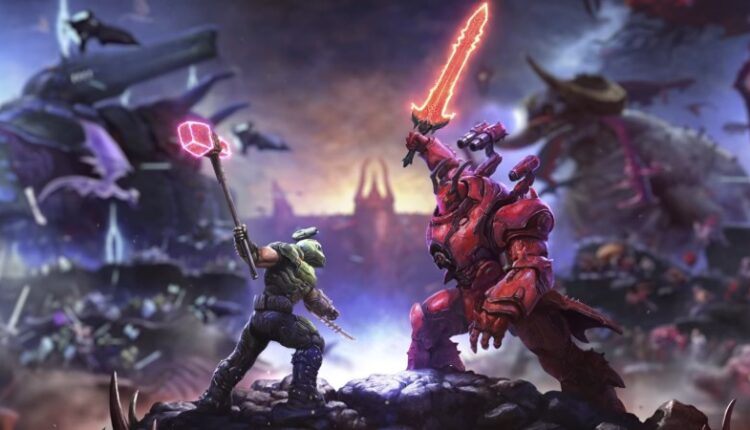 
Doom Eternal: The Ancient Gods – Part Two is set to be revealed in full on Wednesday, March 17. Bethesda has released a teaser video to help build hype and give fans an idea of what the game’s second piece of DLC will entail.

The brief clip doesn’t show a whole lot – it’s a trailer for a trailer, after all – but it does give a look at the massive conflict making it way into the game. The Doom Slayer looks like he’s got his work cut out for him, but he’s got plenty of backup and I’m sure players wouldn’t have it any other way.

The Ancient Gods – Part One released last October and saw the Doom Slayer take on an all new demonic invasion of Earth following the events of Doom Eternal. Part Two picks up from that story’s wild ending and will likely prove to be as challenging as everything else in the game which is, well, pretty dang hard.

Doom Eternal launched last spring to positive reviews, with many praising its tight gunplay, phenomenal presentation, and white-knuckle challenge. The game’s emphasis on first-person platforming was generally well-liked but the effect it had on the game’s pacing had its fair share of detractors, namely our own editor Blake Hester in this opinion piece on the matter.

For more of our thoughts on Doom Eternal, check out our review of the base game here. You can also read this interesting discussion from the game’s director regarding the possibility of a female Doom Slayer. It’s also worth reminding you that the entire Doom series is now available on Xbox Game Pass thanks to Microsoft closing the deal on its purchase of Bethesda.

Are you looking forward to playing The Ancient Gods – Part Two? Let us know in the comments!

Galahad 3093 Is A Mech-Based Hero Shooter Reminiscent Of Titanfall

Get An Exclusive Look At The Weapons In Deathloop