The Lord of the Rings: Gollum Preview – Escape From Barad Dur 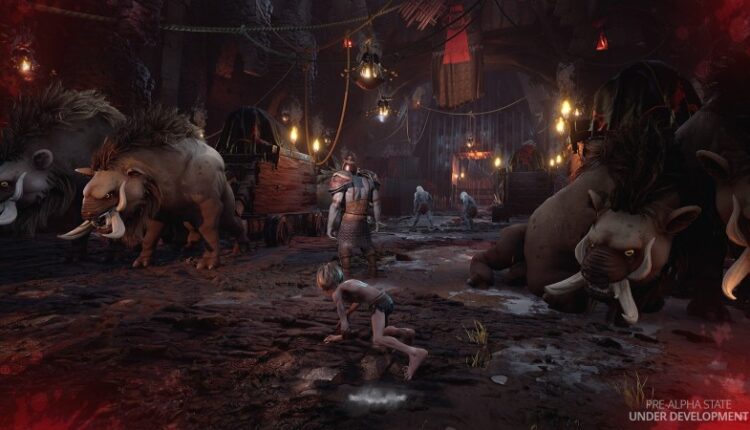 
The Lord of the Rings: Gollum was first announced in 2019, and it was a bit of a surprise. Instead of featuring the noble characters everyone loves, it puts players in control of a ring-obsessed, evil wretch of a hobbit. It’s an idea that’s both head-scratching and cool. On the one hand, experiencing Tolkein’s universe through a perspective as fascinating as the former Sméagol sounds fantastic. On the other hand, how do you build an entire game around a character who generally isn’t known for his imposing stature, heroic qualities, or combat finesse? In a recent demo, Daedalic Entertainment showed us what Gollum is capable of and how his unique talents translate to gameplay.

It’s important to note that the footage I watched was apparently 10 months old, and Daedalic noted that a fair bit of it has changed since then. Still, it offered a good idea of what the team is working to achieve. The Lord of the Rings: Gollum emphasizes the character’s two primary strengths: climbing and sneaking. The demo sees Gollum ascending through orc-infested Barad Dur tower in Mordor where he recently escaped slavery at the hands of Sauron.

Gollum needs to reach the surface and, thankfully, is an excellent climber. After all, he’s had hundreds of years of practice. Gollum can wall-jump, slide down surfaces, swing from poles, leap wall-to-wall, and perform other agile feats. A stamina meter dictates how long Gollum can maintain more strenuous acts such as sprinting or hanging. Levels facilitate platforming by emphasizing verticality, an architectural element Daedalic says is in line with Tolkien’s original building designs. Expect to see plenty of spectacular views from atop tall structures.

As Gollum climbs and scurries his way through hostile territory, he eventually sneaks up on a guard and we see how his dual personas come into play. Since Gollum is the dominant personality at all times, Sméagol doesn’t surface much except in these scenarios where players can choose to either act upon Sméagol’s more benevolent nature or give into Gollum’s penchant for violence. In this case, that means whether or not to kill or spare an oblivious guard.

Despite appearances, Daedalic says that just because Sméagol’s options are deemed “good” doesn’t mean they’re always the right course of action. Gollum didn’t survive this long by being nice, and sometimes a more ruthless approach is necessary. Choices matter, though, and whether or not you choose to help or betray the characters you meet will have ramifications down the line. Gollum wins this time, and he leaps around the guard’s neck to perform a stealth kill.

The next area Gollum enters is littered with orcs. Lighting plays a large role in stealth, as sticking to the shadows keeps Gollum hidden from view. If he’s spotted, players have to flee; confronting enemies head-on spells doom for our pathetic friend. Noise is also important. Enemies have acute senses of hearing, and every action Gollum performs makes some kind of sound. Thankfully, Gollum also possesses extra-sensory abilities that allow him to, as Daedalic puts it,  “see sounds,” which lets players know how much noise they’re making as well as detect other characters around them. Gollum also has an inventory for carrying items that can distract characters as well as food to heal himself. 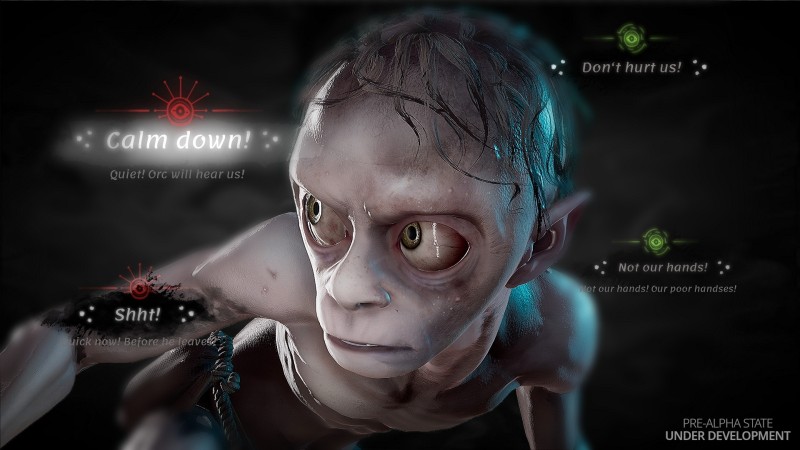 Levels are large and sports multiple paths, giving you plenty of options for choosing how to proceed through them. Daedalic hopes this will encourage multiple playthroughs since you can tackle the game in different ways.

After successfully sneaking through this minefield of orcs, Gollum meets up with a human named Grashneg, whom he encountered earlier in the game. For a character who is famously volatile, Gollum is surprisingly fond of Grashneg, and the two agree to work together. Cooperating with other characters plays a significant role in the game, as allies sport abilities that Gollum lacks, and vice-versa. In this case, Grashneg can use his strength to plow through obstacles but can’t see in the dark as well as Gollum can, which is where he picks up the slack. The two work together and Gollum soon finds a literal light at the end of the tunnel: a crack in the wall with daylight pouring in. As he makes his way outside, the demo concludes.

Daedalic confirms that the game will see Gollum venture outside of Mordor (as in the books) where he’ll encounter the monstrous spider, Shelob, and even venture into the land of the elves. Along the way he’ll run into some familiar faces, though Daedalic isn’t spilling the beans on who makes appearances just yet. Being a nearly year-old demo, the game looked undeniably rough. Animations looked rather stilted and cutscenes had an awkward quality to them. But the studio promises the game is currently in a much better state than what we were shown. We can only hope that things come together smoothly when The Lord of the Rings: Gollum launches sometime in 2022.