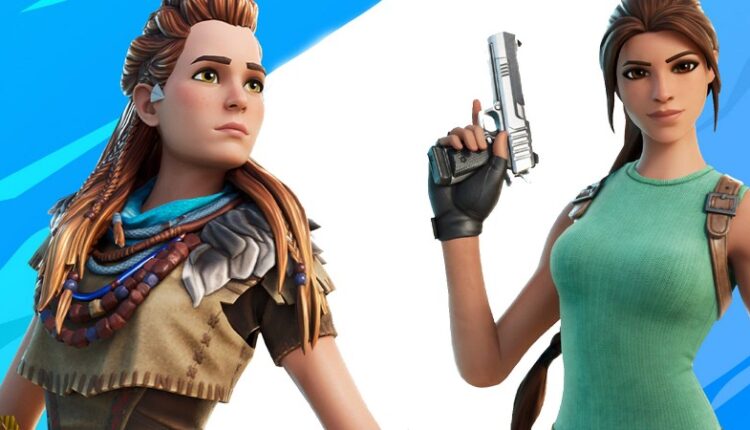 
Fortnite fans rejoiced when Epic not only announced that Aloy of Horizon Zero Dawn fame would be joining the game, but would also team up with Tomb Raider’s Lara Croft in a special mode. The straightforwardly named “Team Up! Aloy & Lara Limited Time Mode”, was supposed to go live today but some technical setbacks have forced Epic to push it back a few days.

This team-up is a special duos mode where two players are outfitted in Aloy and Lara Croft skins and will only have the bow/dual pistols at their disposal. Unfortunately,  the Fortnite Status Twitter account sent a message acknowledging that the mode was not appearing in some versions of the game. The support page doesn’t cite a specific cause, but whatever the issue appears to be severe because Epic has disabled the mode and moved its launch to April 19.

The Team Up! Aloy & Lara LTM has been temporarily disabled until the mode is up on all platforms. This mode will now begin its run starting the week of April 19. Stay tuned for an update on when players can jump in. pic.twitter.com/3aFUrjTU9T

Although players won’t get to throw down as a tag-team of two of gaming’s most popular icons, PC Gamer reports that players can still purchase the Aloy bundle. It includes the Aloy outfit, Glinthawk Glider, the Aloy the Skywatcher loading screen, and other goodies (that can also be bought individually). So if nothing else, you’ll still get to run around the island as Aloy which is pretty cool in itself.

All of this is a part of Fortnite Chapter 2, Season 6 which is themed around hunters. New additions have included the aforementioned Miss Croft as well as animal predators such as velociraptors because hey, why not? Fortnite has proven it can get away with doing anything it wants at this point, which, and least for me, makes it a very interesting game to keep an eye on even if I’m not actually playing it very much.

Have you enjoyed Fortnite Season 6 and are you bummed about the delay of Team Up! Aloy & Lara LTM? Let us know in the comments!

New Update Causes Lego Mario To Call Out For Luigi