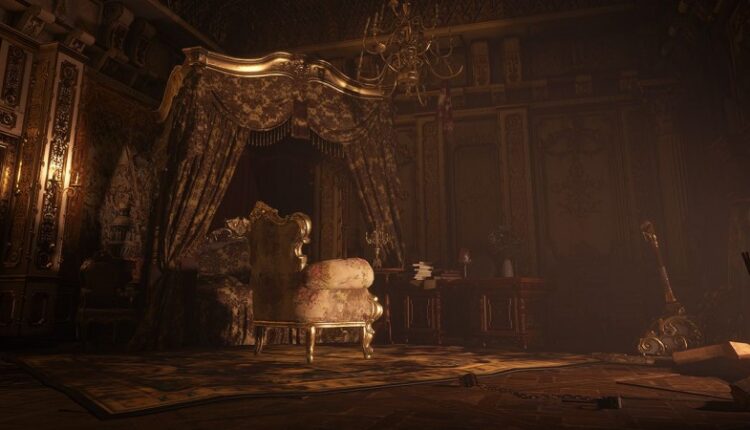 This particular puzzle is in the Atelier you will come across in Lady Dimitrescu’s massive castle. This will require you to find five hidden bells, a task that you’ll see when you find a half-written note on the painting atop an easel in the Atelier room. The note will advise Ethan Winters (poor guy) to ring all five bells at once. I know how that sounds, daunting right? Don’t worry, you don’t actually have to ring them all at the same time, that would be impossible. Instead, you’ll hit each bell and this will cause the torch on the top of each to light up. You can trigger the torch at the top being lit up by either hitting it with a melee attack or with a bullet from your preferred gun. It’s pretty simple, you just have to actually find the bells first. That’s where we come in.

“Let the five bells of this chamber ring out.”

You’ll start your journey in the Atelier room, which you’ll find adjacent to the Hall of Joy in the castle. You’ll run by this area a few times, so you can’t miss it. You’ll know you’re in the right spot because this is where the easel is found, which kickstarts the entire puzzle mission to begin with.

The first bell is very easy to spot. Directly across from where you entered into this room, you’ll see a male bust. Next to it, you’ll see the first bell. I recommend hitting it with your knife to conserve some ammo, but there is ammo in the cabinet in the room if you feel shoot-happy.

If you opted into getting the ammo in the cabinet (you’ll need to melee it to access the coveted restock inside), you’ll see another bell in front of another painting. This painting has a gold frame, you can’t miss it. Hit that bell to trigger the torch, and then it’s time to do a little more exploring.

The nearby stairs are your next destination. Go up and go towards the window on the opposite side. If you look outwards, you’ll see the fourth bell. You can shoot it through the window, so make sure you have ammo to spare.

And we’re almost done! See? Not so hard! In this same area, you’ll note a gorgeous chandelier. You can’t melee this either, but if you shoot it? You’ll make it move and when that happens, you’ll note the final hidden bell. Shoot that to trigger the torch and you’ll immediately hear a door opening inside yet another painting, this time of Lady D herself. Once this passageway is open, you’re done! Try not to die.