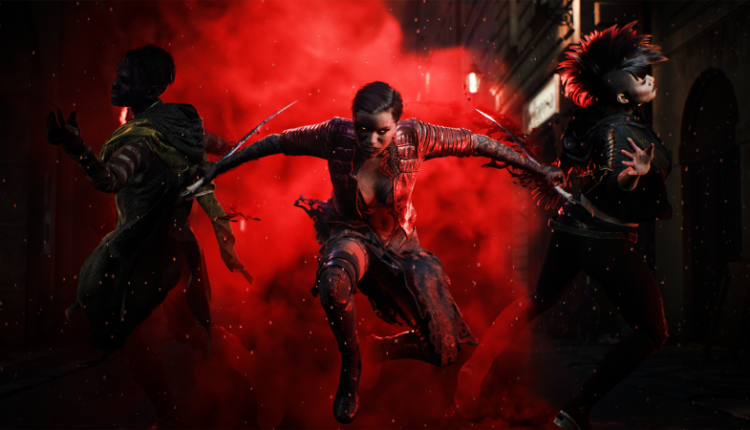 
When I think of the battle royale genre, a few things come to mind: PUBG, Fortnite, Apex Legends, boredom. It’s not a bad genre, but not one I’ve ever really felt super connected to. What I do feel connected to, however, is Vampire: The Masquerade, so when Sharkmob approached me with a new game that is literally battle royale with vampires, I was too intrigued to say no. Surprisingly enough? It works! Here’s my Vampire: The Masquerade Bloodhunt preview.

For those that may not be the biggest of tabletop fans, Vampire: The Masquerade is a stunningly expansive RPG experience that has evolved so much through the years. Numerous adaptations have come and gone to expand upon this world, including video game takes that breathe fresh life (or unlife?) into the characters we know and those we can create. I’ve tanked years into this universe and used the very rules of The Masquerade to build so many fan-creations of my own, so imagine my surprise when the latest game to be announced under this umbrella was a PvP battle royale adventure. Now take that surprise, and imagine how that tripled when I found myself really enjoying my time with Bloodhunt.

It turns out that this is actually the perfect pairing. What are vampires, if not incredibly cunning creatures with the means, and desire, to kill? What is battle royale, if not very much the same? Unlike other shooter genres, battle royale consists of a blend of tactical waiting and rushing for the gold. Hurry up and wait, if you will. That strategy when placed up against a macabre backdrop of vampiric glory, and you’ve got yourself an innovative game that fills a niche that we didn’t even know needed filling.

My time with Bloodhunt was a little rough around the edges, which was expected given that the build I enjoyed was in the early alpha stage. Taking to the clans that I’m intimately familiar with through previous tabletop experience, I was excited to explore how those skills would play out when going up against other players. Against the devs themselves, even.

Bloodhunt is set in Prague and where we started our bloodthirsty journey was in the heart of Elysium. Those familiar with this property will recognize that as a neutral hotspot for clans to meet. In the realm of battle royale, however, it’s anything but neutral. In my first round, I chose a Muse, mostly because they looked pretty, and that was always a class I chose when rolling my own character. I got smoked; I think I was one of the first people to die because I kept just running in like a maniac. The only upside was that a dev that worked on the game died immediately after me, so I felt a little bit better. The second time, however, I wizened up. I chose based on skill, not aesthetic, and went Vandal (she still looked cute, don’t worry), and the tides of battle changed. I think in my second match, I ended up landing in the top 8 spot, which isn’t too shabby when you remember that I died first the previous round.

For centuries, vampires have lived and thrived among humans, maintaining The Masquerade. Now a treacherous betrayal has stirred a war amongst the vampire sects, exposing them to the secret society known as The Entity. With a holy mission to annihilate all vampires, they take the hunt to the streets of Prague…

Players will need to use their supernatural powers, weapons, and wit to survive the night and restore the masquerade!

The skills definitely matter here. There is one class that can heal themselves and allies. There is another that just Harambe-smashes foes into the ground. Of the six classes shown, there is a playstyle for everyone, which helps when pairing with different gamers before diving into a match for the kill.

Just like any battle royale game, there are resources to be found all over the map, including live victims to drain their blood to boost powers and regain health. The standard weapons can also be found, including sniper rifles, SMGs, a bow, and a sick pair of daggers that made mele so much fun.

The good thing about Sharkmob making a game within the battle royale scope is that they could have fun with it. Battle royale is pretty cut and dry, you know what needs to be there to make it enjoyable, and players know – largely- what to expect. This was very evident when playing with the team because we were joking the entire time about how we couldn’t believe there is actually a battle royale game about vampires. It was obvious this team had a lot of love for the lore and for the community that surrounds Vampire: The Masquerade. This isn’t a cheap shot; it’s not a disrespectful parody; it’s a standalone experience that newcomers to the staple can enjoy and veterans can relish. It’s just a genuinely enjoyable online experience to dive into with friends and an experience I was pleasantly surprised to learn that I wanted to play more of.

Did I mention you could also scale the tallest of buildings like you’re in Assassin’s Creed? Because you totally can, and it’s awesome.

Prague provides a beautiful backdrop for this game. Each shop that was enterable had its own personality; it had its own evidence of life. There was a surprising amount of area to explore for being a contained battle royale map due to the verticality of the aforementioned Assassin’s Creed-esque scaling. This made playing a more tactical game easier to do, especially if you landed yourself a sweet sniper. 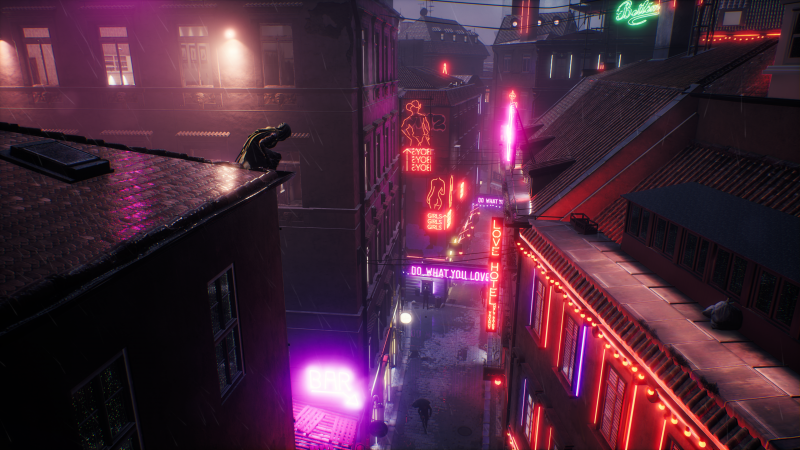 The character customization was also fun, especially making my goth babe have silver hair like mine and winged eyeliner that could kill a man. There are cosmetic options that players can choose from, as well. Since this is a free-to-play game, there are added cosmetic options – such as outfits, glasses, makeup, etc. – to purchase with real money, but that’s not out of the norm for a game that is completely free. None of the purchasable items are pay-to-win either; they are purely cosmetic, so you don’t have to worry about any bait and switch when it comes to what is free and what is “free.”

At the end of the day, Vampire: The Masquerade looked rough, but that was because of the alpha build. Despite the shorn edges of the gameplay experience, I can see a real treasure buried beneath early development woes. Will this be earning game of the year anytime soon? No, and it’s not meant to. It’s meant to purely be a fun, competitive PvP experience set within a world that has a very dedicated community. And you know what? Sharkmob nailed it.

For those interested in checking out this weird dream-made-a-reality, there is a closed beta kicking off on July 2nd. You can learn more about the game and register for the closed beta through the official Sharkmob website right here. You can also add it to your Steam Wishlist here if that suits your fancy.