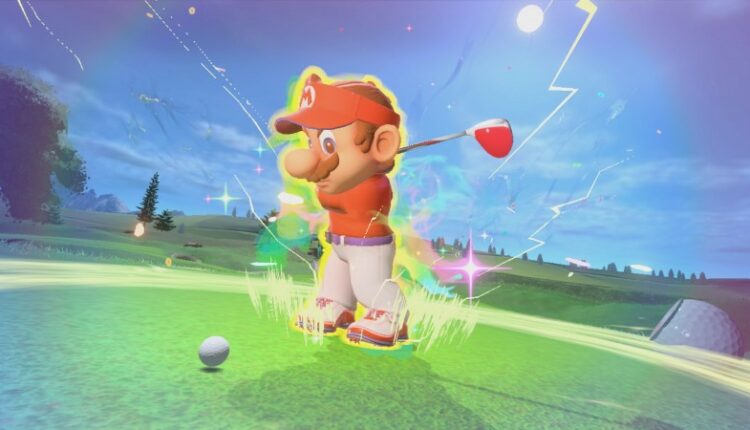 
Mario Kart and Mario Tennis players understand that when Nintendo’s cast of characters infiltrate a sport, they take the spirit of the game and turn it on its head with power-ups, unique character abilities, and zany courses. The game of golf is a patient affair, but when Mario and company step up to the tee in Mario Golf: Super Rush, it’s hardly slow-paced, as the unique take on the sport injects foot races, battle modes, and special abilities to often chaotic results.

The core golf mechanics shine in Mario Golf: Super Rush. Lining up your shot, using the in-game measuring tools to judge the distance you need, and entering your backswing is easy for anyone to understand. Selecting the power on your shot is done with a single, timed button press, with each stroke giving you the opportunity to add subtle effects like spin and curve through intuitive commands. On multiple occasions, I found a tree standing in my path to the green, but through shaping my shot, I could choose to either wrap the ball around the tree or float it above and land on the other side. Nailing a perfect shot like that is a regular occurrence thanks to streamlined controls, but it doesn’t make it any less satisfying to see your ball curve around a tree and land perfectly where you were aiming.

Obviously, the goal is to get your ball on the fairway or green, but if you find yourself in other spots, whether that’s the rough, a sand trap, or something worse, you must take those elements, as well as any slope of the terrain, into account. Where your ball lies affects the distance, trajectory, and even how the ball curves off your club. Once on the green, putting is as simple as lining up your shot, again accounting for the slope of the surface, and timing the meter to apply the correct amount of power. The tools at your disposal make the core golf mechanics continuously enjoyable from moment to moment and lay a terrific foundation for the more over-the-top deviations from the traditional golf formula. While Mario Golf: Super Rush provides a strong take on the traditional sport, destination modes like Speed Golf and Battle Golf (both of which can be played online) provide unique and entertaining twists to the tried-and-true formula.

In Speed Golf, you tee off alongside up to three opponents, then take part in a foot race to where your ball lands before taking another swing. The goal remains to get the ball in the hole, but rather than taking your time to line up the shot, you have the clock to worry about; each stroke adds 30 seconds to your course time, and the player with the lowest time takes the podium. As you sprint to your ball, you need to consider the best route, your stamina meter, and on-course obstacles. However, the most fun part of the mode is when special shots and dashes start messing with the characters. While golfers are typically among the most respectful and chivalrous athletes, that all goes out the window in these modes; blasting somebody with your special dash is simply too much fun to ignore. However, Speed Golf’s biggest weakness is that this element isn’t taken far enough; too often the running parts of this mode feel uneventful, and the action often feels like filler between your strokes. Thankfully, for those who like the more chaotic elements, there’s Battle Golf.

Battle Golf drops you into an arena with other players in a nonlinear, free-for-all mode with the mission to sink three holes first. The stadium is full of environmental traps and weapons for players to use on each other; blasting a nearby rival with a Bob-omb as they try to line up their putt is beyond satisfying. Since holes disappears after the first player sinks it, you need to be strategic about which flagsticks you target, as well as the path you take to each one. On top of dangers like Chain-Chomps, Thwomps, and Bob-ombs, players can also use special shots to electrocute other players, turn their balls into imprecise Yoshi eggs, and even haunt them with a Boo to cause their shots to veer off course. For every half-measure that Speed Golf takes, Battle Golf goes all in, delivering my favorite mode in the Mario Golf: Super Rush package.

Unfortunately, another main attraction to Mario Golf: Super Rush doesn’t live up to its potential. Serving as both a tutorial and a linear story mode with light RPG elements, the single-player Golf Adventure is an adequate place to start your Mario Golf journey if you’re wanting to learn the basics, but the shine wears off fast. The mode is skippable thanks to its tendency to spotlight different unexciting variants of Speed Golf, repetitive boss fights, and downright frustrating modes. One section drops you into a big open course with several nonlinear holes like Battle Golf, only it’s a solo version with stroke limits and tornados you use to reach higher areas; if you don’t hit these tornados at just the right angle or miss the tornado and instead land at the foot of it, your attempt is basically done for as you waste precious strokes returning to the correct angle. Add in a completely nonessential story as the backdrop, and you’re better off sticking with the standalone modes.