Whether you’re talking Insomniac’s beloved Spider-Man games or the recently announced Guardians of the Galaxy title from Eidos-Montréal, there’s never been a better time to be a gaming Marvel fan. On top of the handful of recent and upcoming triple-A console and PC titles available, those who want more quick-hit experiences can dive into the world of mobile gaming. With titles like turn-based hero collector Marvel Strike Force and ever-expanding fighting game Marvel Contest of Champions, mobile players have several options as well. Those options are expanding by one later this year, as Netmarble, the team behind action/RPG Marvel Future Fight, is back to one-up itself with an all-new open-world action/RPG for mobile devices called Marvel Future Revolution.

Initially revealed at PAX East 2020, Marvel Future Revolution takes the multiverse concept to new levels, with multiple Earths from different realities converging to create one “Primary Earth.” The story, which is penned by Marvel Comics writer Marc Sumerak, kicks off with Vision sacrificing himself using the Convergence Engine to prevent the newly unified worlds from being destroyed. This locks the worlds together, bringing together disparate pockets of reality. 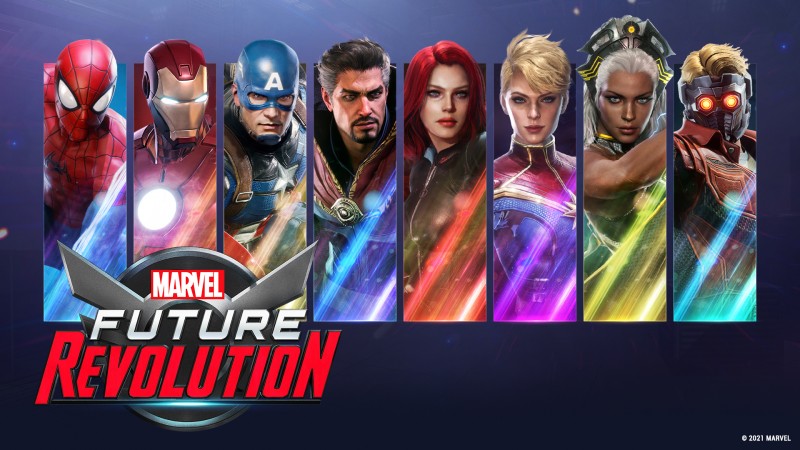 While this event brings together all kinds of heroes from different realities, it also brings together a massive alliance of villains. Now, the new heroes must work together as Omega Flight to stop the villains who are trying to rise up and take advantage of the situation. At launch, players will have the ability to select from eight different heroes as they battle the forces of evil. When the game is available, the roster will include Iron Man, Captain America, Spider-Man, Captain Marvel, Doctor Strange, Black Widow, Storm, and Star-Lord. When you fire up Marvel Future Revolution for the first time, all eight of those heroes are available to you to select and play as, with no unlock requirements.

Unsurprisingly, that roster will only grow as time goes on (Netmarble’s other Marvel game, Marvel Future Fight, currently features more than 200 characters, while the roster of Scopely’s Marvel Strike Force is rapidly approaching that milestone). In fact, by the end of the year, a new playable character will join the Marvel Future Revolution roster. 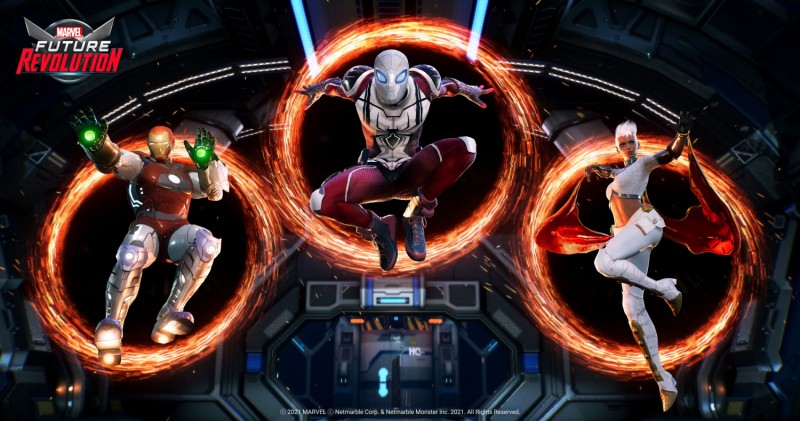 While each character has an iconic look, they are also fully customizable with tons of different costume combinations. You can swap out individual costume components for each character’s body, hands, feet, and head. With this ability to mix and match, Netmarble hopes to deliver more than 400 million different costume combination possibilities per hero. In addition to costumes inspired by known moments in the comic books, players can also look forward to costumes from the Marvel Cinematic Universe as well as original costumes inspired by the various world regions in the game (more on those later).

Of course, there’s no need for a massive team of heroes if there isn’t a coalition of powerful villains to thwart. In the footage I saw, iconic villains like Thanos, Red Skull, Maestro, Ultron, Kingpin, MODOK, Yellowjacket, and Loki were facing off against the legions of heroes. These heroes and villains collide and clash across various regions of this new Primary Earth, delivering unique areas from the pantheon of Marvel comics. 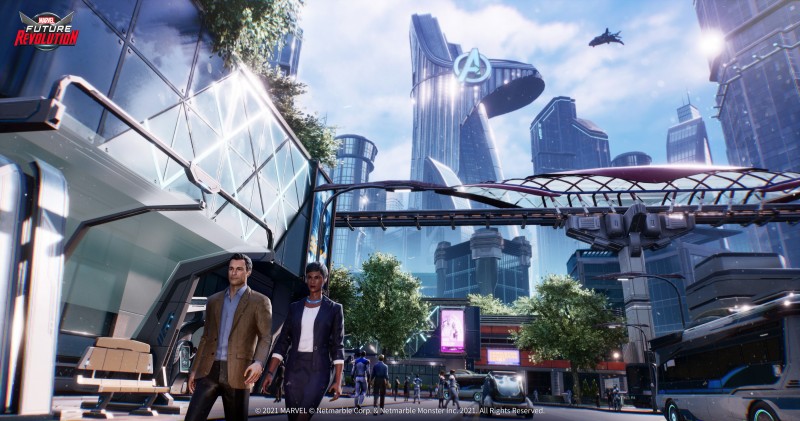 The Arenas of the Revolution

Now that we know all about the characters that’ll be flashing across our screens, what about the places you can visit? After all, this isn’t some ordinary version of Earth these battles are taking place on. In fact, Marvel and Netmarble were able to dig deep and flex their creative muscles with the settings available in the game. 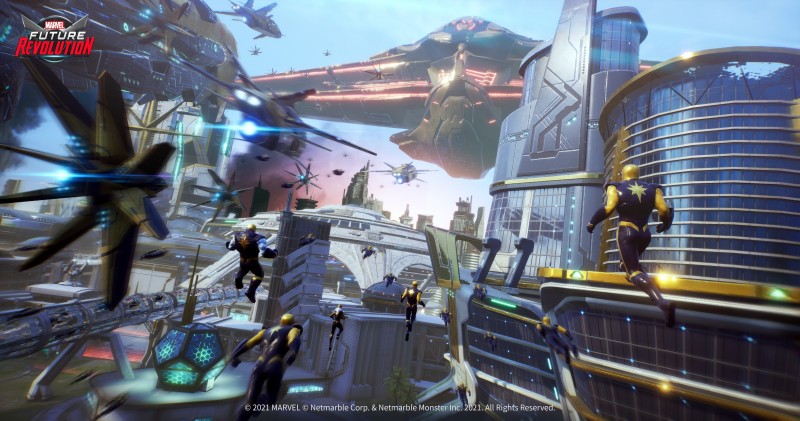 “We sat down when we first met and we just started writing locations and characters and things that a Marvel fan would dream of having access to,” Marvel Games VP of creative Bill Rosemann says. “Usually in stories, you could travel to Xandar or travel to Sakaar or go through a time-warp to experience Hydra America. That was a dream of, how can we bring these locations that are all based on popular characters, popular stories, really cool villains, and bring them all together so that you can go from one to another. If you’re a new Marvel fan, it looks cool and it’s fun to explore this fantasy world. But if you’re a longtime Marvel fan, let me tell you, the amount of – I won’t even call them Easter eggs – it’s just Marvel ingredients that fill every nook and cranny.” 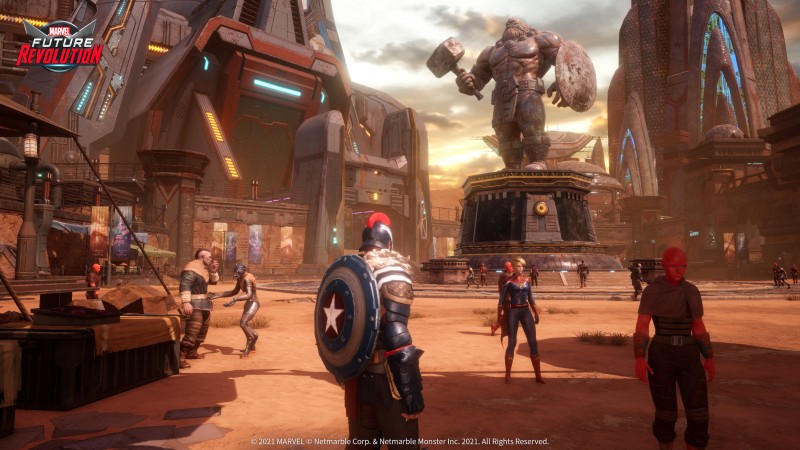 At launch, players can do battle across five regions, each with its own striking visual style. Hydra Empire poses the question, “What if Hydra took over and reigned after World War II?” This puts players into that scenario as they battle through a Hydra-controlled portion of the United States. Next, Midgardia is where survivors of Asgard have built an Asgardian city on Earth. Next up is New Stark City, which is a technologically advanced metropolis built by Tony Stark. New Stark City houses Omega Flight as well as many of world’s most brilliant scientific minds. In the Earth version of Sakaar, you fight through a desert wasteland full of arenas, ruled by Maestro. Finally, Xandearth arrives on Primary Earth from a reality where Xandar was destroyed by Thanos and the survivors moved to Earth and created a new capital city. 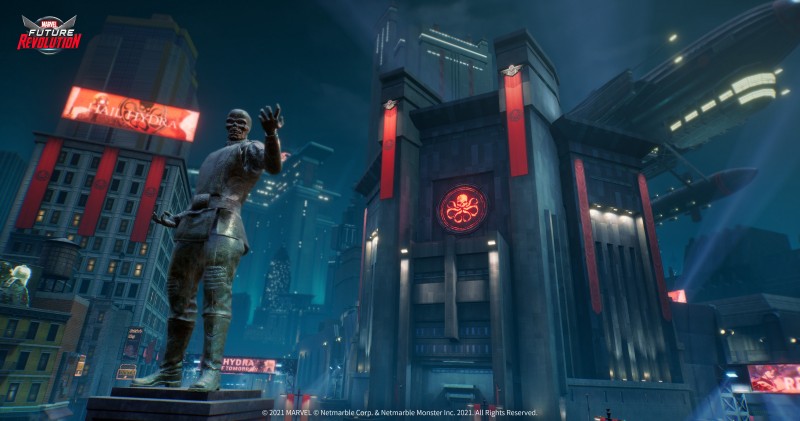 “We thought about each character – Star-Lord, Storm, Spider-Man, Captain America – could there be environments that are drawn from their history, so it might mean more to them?” Rosemann says. “So in the story, they might have a more personal connection like, you can imagine when Captain America goes into the Hydra Empire, game on! He’s taking down Skull. We just kind of did a greatest hits; we just started writing down great stories, great characters, great locations, and we knew that we could pick and choose. There is nothing holding us back, because in this story, all the worlds – and not only different worlds, but different realities – are all coming together. It just opened up the entire Marvel toy box to us.” 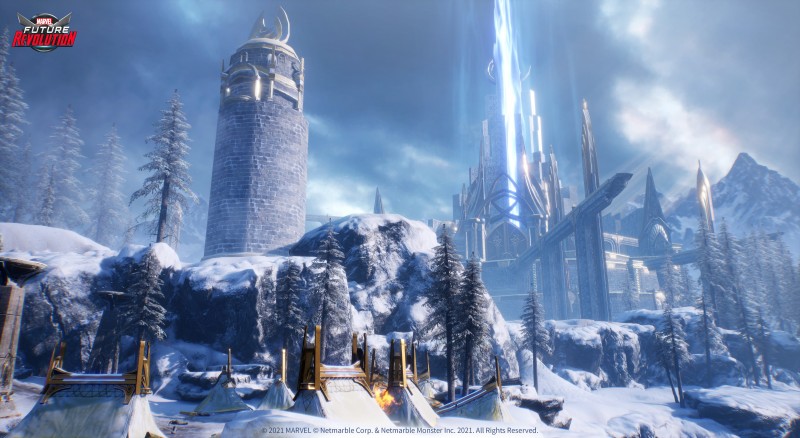 Within these regions, the battles play out across various game modes, giving players additional ways to engage with the content, but also more rewards.

While the hero and region lists are always intriguing to keep up with, the most important aspect is in how the game plays. Since this is a more action-based game than something turn-based or passive like Marvel Strike Force, Netmarble is using the virtual d-pad convention, where no matter where your finger is on the left side of the screen, you’ll be able to guide your character by sliding your finger or thumb in the direction you want. Then, you can select which skill you want your hero to use with an ability wheel.

“How it plays out depends on how skillful you are with the combo of the active skills that are given to you,” Netmarble executive producer Joe Lee says. “The cherry on top for this game would be that we are including a lot of superheroes that fly around, so the flying element that allows the player to actually attack from air to ground and ground to air, all of that is going to be included and it’s going to be a unique selling point of this game.”

As you play more, you level up your heroes via various progression systems. In addition to conventional leveling, players can also add gear, while some costumes are more than cosmetic, providing additional functionality and efficiency in combat. Through the various modes, you can loot gear and material to acquire that gear for the heroes. 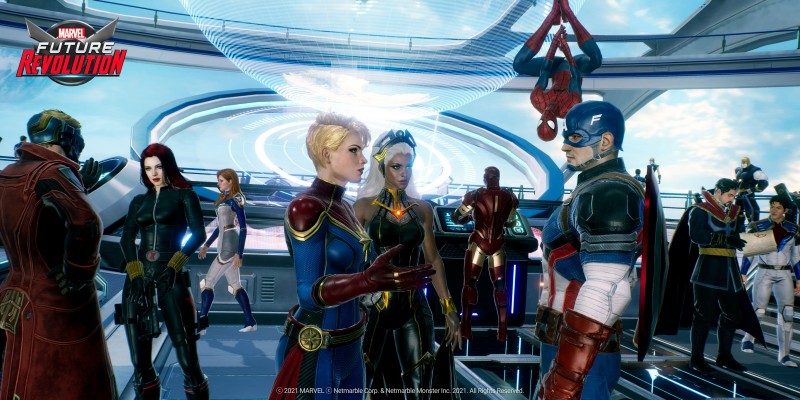 In addition to a single-player story campaign, players can expect several different modes at launch. Blitz and Raids offer four-player co-op PvE scenarios where they battle against bosses and supervillains like Thanos and Ultron. Special Operations offer another four-player co-op experience, but every character has balanced stats and specs to provide an even playing field. In Special Operations, you have objective-based missions like wave-based defenses or a goal to save civilians being held in the battle zone.

Omega War mixes up the experience, offering PvP between two teams of 10 players. This can last anywhere between 4 to 10 minutes in a mode that looks chaotic as can be – until Netmarble told me about Dark Zones. In Dark Zones, players enter a 50-player, free-for-all. Dark Zone offers some of the best loot to players, but you’re competing with up to 49 other players, participating in both PvE and PvP combat. You can enter solo, with friends, or with your guild as you take on other players, enemies, bosses, and monsters to secure some of the best loot Marvel Future Revolution has to offer. 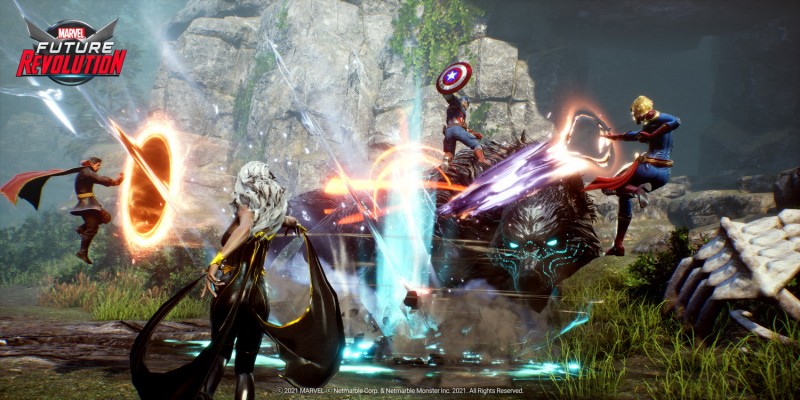 Spending Money to Save the Day?

Of course, being a free-to-play mobile game often brings with it the apprehension of egregious or exploitative microtransactions. While that is something that players are rightfully fearful of, Netmarble feels it is striking a healthy balance with its monetization. “Unlocking characters is going to be free, and that’s going to stay free in the future too,” Lee says. “When you say ‘free-to-play’ kind of game, a lot of people have different ideas about it. We always know from our experience that at least 97 or 98 percent of the total players that we get stay free. And we still want those players to also enjoy the game as much as possible.”

“In general, let’s just say it will be fair,” Marvel Games director of production Danny Koo says. “We are not looking into a free-to-play players versus pay-to-win players kind of competition. The goal of the game is to even the playing field for both sides of the players.”

While that is certainly nice to hear from the developer, players are right to be skeptical of microtransactions in a free-to-play game given how so many mobile games work. With so many PvP modes and elements in Marvel Future Revolution, Netmarble has a tall task in front of it, but the company is confident in how its gameplay works.

“We don’t want to go too deep into [microtransactions adding stat boosts to characters],” Lee says. “The gameplay that we’re providing is actually going to involve a lot of players knowing the right kind of combos at the right time when it comes to boss fights and stuff like that. Even when you’re fully geared with lots of dollars invested into the game, unless you know how to play the game properly, you’re not going to win the day. That’s the basic philosophy that we wanted to have this founded on.” 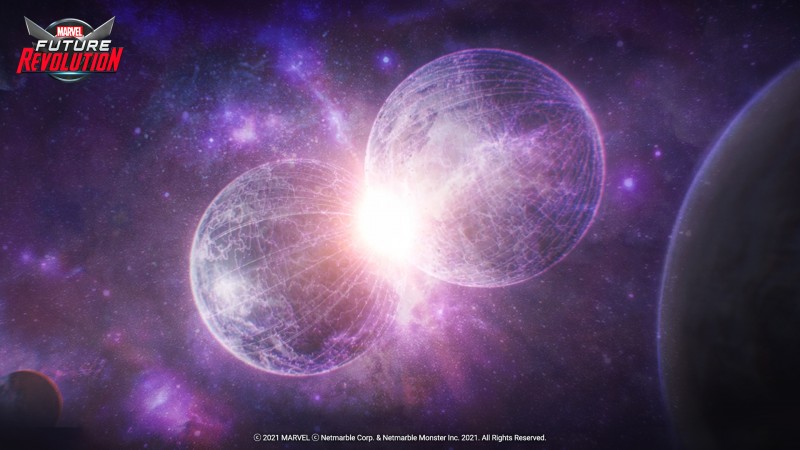 Marvel Future Revolution seems to have a strong foundation in place for its upcoming launch, but as with most mobile games, the experience will continue to evolve. Not only will players be able to play through the various modes with new heroes, but new villains will present themselves as well. Those new characters also come with new content, new regions, new scenarios, and special events tied to what’s going on in other parts of Marvel’s massive entertainment empire. Marvel Future Revolution launches on iOS and Android sometime later this year. Pre-registration opens starting on June 29.