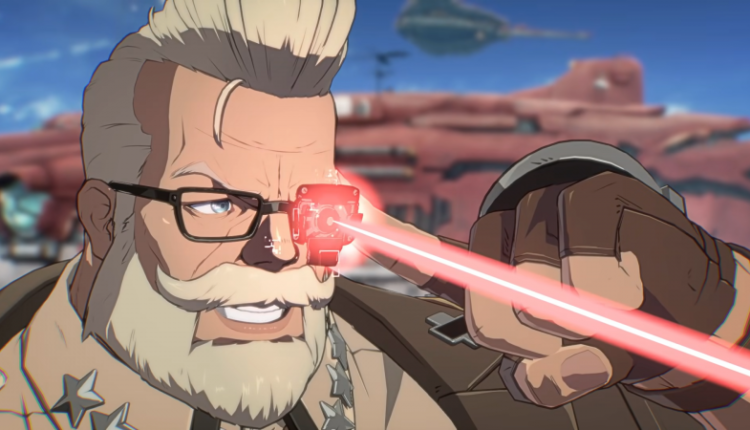 
Guilty Gear Strive was released a little over a month ago, and now Arc System Works is ready to start delivering new characters to the game. In a trailer released last night, we looked at the first DLC character, Goldlewis Dickinson, and the roadmap for the upcoming slate of content in Strive’s Season Pass.

Goldlewis Dickinson is the “Secretary of Absolute Defense,” a slightly different position than what we have in the real world United States. Slightly cooler, too. He’s dressed in what I’m sure isn’t a standard-issue uniform, complete with jeans covered with chaps, a big horned belt buckle, and actual horseshoes emblazoned on his gloves to give a little extra impact to his punches. This big brawler carries a heavy-duty coffin with an Area 51 sign slapped on the front. He claims that there aren’t any aliens around in the trailer, but the blue otherworldly arm punching from the coffin says otherwise.

Dickinson’s move-set is reminiscent of other burly fighting game characters with big sweeping attacks utilizing that heavy coffin and his alien friends to apply pressure. Also at his disposal are flying drone bomb projectiles to keep enemies busy while Goldlewis finds a way in to attack. Once the Secretary does get in, he has options by using his command grab to apply three skull-cracking headbutts or shoulder charging in to start a combo. Goldlewis packs some serious firepower with a massive chain gun he can combo into from a coffin attack and a super that blasts his unfortunate victims with an orbital laser from space.

Goldlewis Dickinson is slated to hit Guilty Gear Strive on July 27 for season pass owners and on July 30 for those who wish to pick him up individually on PlayStation consoles. Steam users will be available to find the DLC for individual purchases on July 27. Arc System Works gave a rough timeline for the rest of this season’s DLC along with this character announcement. No price was given on buying Dickinson solo, but the season pass runs $29.99. August will bring another character, with another fighter coming sometime before the end of the year. 2022 is the current time for the final 2 DLC characters and new stages for the season, the final one bringing new story content along with it.

Who’s missing from Guilty Gear Strive’s roster that you’d like to see return? Have you been playing Strive, and what do you think of it? Tell me about it in the comments!

Exclusive Look At The Characters Of Shin Megami Tensei V