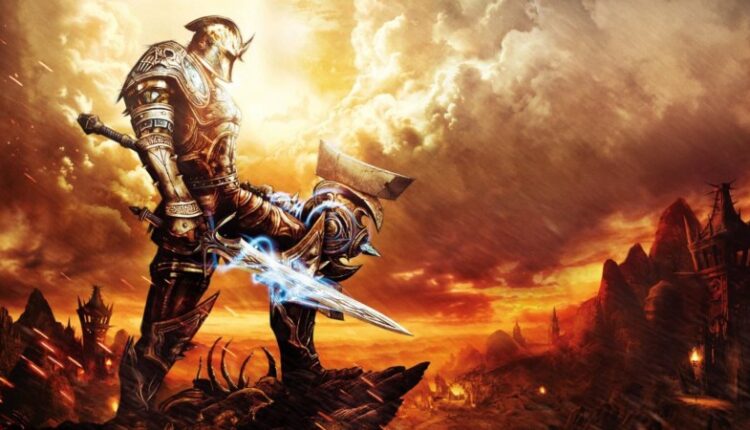 
PlayStation has announced the PlayStation Plus lineup for November and it’s one of the largest free games offerings for the service yet.

Six titles are up for grabs this month, three of which are exclusive to VR. Knockout City, Kingdoms of Amalur: Re-Reckoning, and First Class Trouble are your “standard” games this month. The Persistence, The Walking Dead: Saints & Sinners, and Until You Fall are what you can expect on PSVR. All of these will be available to add to your library on November 2.

Knockout City was released just this year and it’s coming to PlayStation 5 and PlayStation 4 for free as part of the PS Plus lineup next month. It’s an online multiplayer game where you play dodgeball across multiple maps while using a variety of abilities and powerups to stay alive and take your opponents out. Check out Game Informer’s Knockout City review to find out why we gave it an 8.5 out of 10.

First Class Trouble will be coming PS5 and PS4 as part of the PS Plus lineup as well. Described as a social deduction party game, this six-player mystery will assign four players to be Residents aboard a luxury space cruiser tasked with stopping a rogue A.I. protected by the Personoids, who will be played by the other two players. They’ll need to deceive the other four players to keep the A.I. alive at all costs. Check out Game Informer’s coverage of First Class Trouble for more information.

The last non-VR title coming in the November PS Plus lineup is Kingdoms of Amalur: Re-Reckoning. This remaster of the 2012 now-cult-classic title that goes by (basically) the same name is just a PS4 game, although PS5 players will be able to play it via backward compatibility. With a story written by R.A. Salvatore and Spawn creator Todd McFarlane, and gameplay designed in part by former Elder Scrolls IV: Oblivion lead designer, Ken Rolston, Kingdoms of Amalur mixes fast-paced third-person action combat with the deep RPG systems you’ve come to expect in the fantasy genre. Check out Game Informer’s review of the original, Kingdoms of Amalur: Reckoning, to find out why we gave it an 8 out of 10 back in 2012.

On the PSVR side of things, you’re getting The Persistence. This horror game pits you against a doomed deep space colony starship overrun by mutated crew members who want to kill you. You must survive all that the now-murderous ship has to offer as you move deeper and deeper through its ranks to (hopefully) repair it so you can escape. Read up on Game Informer’s coverage of The Persistence for more information about the sci-fi horror roguelite.

The Walking Dead: Saints & Sinners is set in the same universe as the Walking Dead, you must fight through the walker-infested ruins of what used to be New Orleans. You must take out dangerous walkers in your way while deciding if others in the world are friend or foe. Oh, and you have to do it from the terrifying first-person perspective, too, so if plunging an ax into a walker’s head is your jam, you’re in for a good time. What’s especially neat about this title being in the November PS Plus lineup is that it just received a large update called Aftershocks back in August.

The final PS Plus game you’ll be getting next month is Until You Fall. Described as a collision of synthwave and fantasy, this PSVR sword fighting game will see you taking advantage of mythical settings and magic-infused weapons to defeat your foes. It’s a hack-and-slash roguelite, too, so you can expect to die a lot…which is always fun in VR!

If you haven’t yet, be sure to add this month’s PS Plus offerings – Hell Let Loose, PGA Tour 2K21, and Mortal Kombat X – to your library. You have until November 1 to do that.

Are you excited for next month’s PS Plus offerings? Let us know in the comments below!