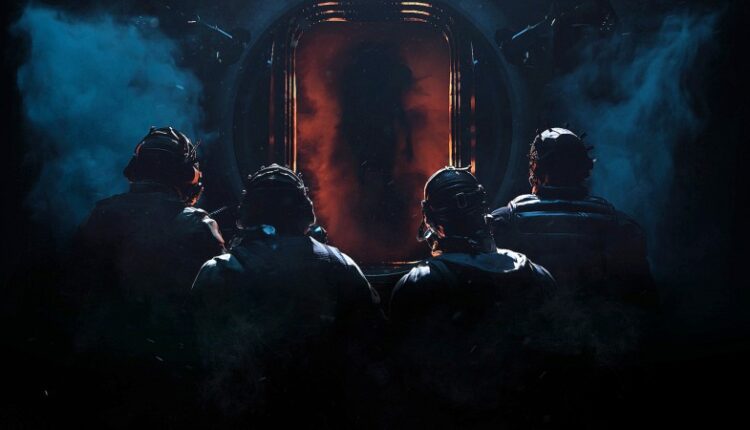 
Turtle Rock Studios helped define the cooperative squad-based genre with Left 4 Dead and its recently released spiritual successor, Back 4 Blood. 10 Chamber Collective, a small group of ex-Payday developers, was undoubtedly inspired by the acclaimed zombie-slaying franchise. In truth, the studio’s debut project, GTFO, is Payday meets Left 4 Dead, but with a deliciously dangerous learning curve. GTFO’s satisfying mix of tactical action and all-encompassing uneasiness will likely appeal to FPS fanatics yearning for an electrifying challenge. And now that its two-year Early Access period has ended, 10 Chamber Collective’s survival horror shooter might reach a wider audience. So, how does the full version of the game hold up? Despite a repetitive loop, GTFO smartly differentiates itself from its predecessors while still being an approachable thrill ride.

My four-player crew is held captive by an entity called “The Warden,” who forces us into an underground facility known as “The Complex” to retrieve miscellaneous items that help uncover the truth behind a devastating virus consuming the Earth. It’s immediately apparent that GTFO’s best quality is its oppressive tone. Rundown 6.0, the latest series of available expeditions, is an all-out assault on the senses. From the claustrophobic plummet at the start of each mission to The Complex’s discombobulating layout of laboratories and dig sites, every component of GTFO’s gameplay is inundated with high-stakes tension. Early expeditions (listed in increasing difficulty by the lettered tiers A-D) offer vague tutorial details – locate the objective, proceed to the specified zone, survive an alarm-raising door scan. These tutorials become virtually nonexistent as I press deeper into The Complex. Fleshy, grotesque humanoids, sensitive to light and sound, sleep in the darkness. Any sudden movements or flashlight misclicks can lead to doomsday scenarios. I appreciate these severe constraints. Clear communication and kit experimentation feels more gratifying this way, especially when extraction becomes harder on higher rundown levels.

I spent copious amounts of game time preparing for upcoming expeditions. Loadout balancing is essential in GTFO, and it’s a good thing that each prisoner can come equipped with two firearms, a melee weapon, a heavy-duty tool, and double-edged buffs called “boosters.” GTFO rewards stealthy approaches and meticulous planning, so I usually bring a knife to silently take down unaware “sleepers” while also referring to my bio tracker tool to record enemy positions. Other gear includes blunt weapons and cool gadgets like foam launchers for slowing rampaging targets/gluing doors shut or auto sentries for buffeting pesky flankers with tungsten rounds. Booster effects, such as increased damage and specified resistances, make each prisoner feel like a one-person army. Vanquishing monsters with synchronized melee attacks to establish fortified defenses for mowing down incoming adversaries is never easy. Even so, when each player is attentive and utilizing equipment effectively, GTFO’s squadrons of disparate parts suddenly feel like well-oiled machines.

Launching expeditions with friends is the best way to experience the terrifying mayhem, and GTFO’s team-centric exploration mechanics are proof of this. I’d share medical packs and munitions sprinkled throughout the map with less fortunate companions – that one shotgunner always taking hits on the frontlines or the distant sniper consistently low on ammo. Moreover, tools satisfyingly pay off when paired together. Mines deployed on foamed gateways would exterminate entire armies, allowing the team to save resources for creatures with bigger health pools. Hollering in unison as swarms clamber into a once-empty room and breathing a sigh of relief when the team somehow emerges unscathed rank among my favorite moments in GTFO.

I only wish there was more to do. Scouring predominantly pitch-black settings to collect artifacts (boosters) or locate far-off terminals and other bland objectives grows tiresome. An array of enemy types with wormlike appendages, energy blasts, and tentacled wings keeps the action fresh early on. Still, after you memorize important coordinates, most of that terrifying magic is stripped away. Some interesting environmental puzzles emerge in command consoles (interactive parsers) which let me search for and ping vital items like key cards. But experienced players often ignore these computers, rendering them useless in most cases. And when matchmaking, trolls and/or quitters make playing through hours-long expeditions infuriating. Rundown 6.0 implements competent bots that can be given orders and merciful checkpoints to help remedy these issues. However, there’s nothing more disheartening than watching a trigger-happy stranger queue into a D-level mission with the intent of getting their whole team killed. Finding success is downright punishing if you don’t have a dedicated group.

GTFO might grow stale the more hours I pour into it, but 10 Chamber Collective’s rundown updates function like seasons and are guaranteed to introduce new levels and primary/secondary goals to complete in the coming months. The gunplay leaves a lot to be desired as the catalog of assault rifles, SMGs, pistols, and shotguns feel the same, but stealth runs are satisfying to plan out with others. Guttural screeches of enemies are bloodcurdling during engagements, while dark and complicated backdrops limit sightlines and keep me on my toes. GTFO isn’t for the faint of heart. Nevertheless, the fear of death means that re-strategizing and improvising are commonplace, which is a metagame that feels disappointingly absent in most cooperative shooters as of late. If you’ve been craving an FPS that tests your critical thinking and mechanical skills, then GTFO might just be the perfect hidden gem to satiate that ravenous hunger.